It was a beautiful autumn morning when I set off to meet Dave and Chris in Holywell Dene. The plan was for we three to meet up, cycle for a couple of hours then rendezvous with Ian for a second session in the afternoon. My day didn’t start well. I’d just joined the bridleway leading into the dene when I heard the familiar hiss, hiss from my rear tyre. That tyre had been fitted with a Slime inner tube so I was hoping the consequences wouldn’t be too serious. I carried on to the meeting place and checked the tyre. The pressure was down but the tyre wasn’t flat. I pumped it up and whilst waiting for my companions, took a few photographs.

When Dave and Chris arrived we set off along the waggonway towards Monkseaton Drive. Unsurprisingly we negotiate our way around a lot of fellow cyclists, dog walkers, joggers, and pedestrians. We then head down to the promenade at Whitley Bay and headed north towards Seaton Sluice and Blyth.

Once we reached Blyth Quayside we called in at the River Cafe for coffee and a scone. That done, we headed along the River Blyth to Furnace Bank at Bedlington then on to Low Horton. After Low Horton we followed the path of an old waggonway which is quite a technical ride because of the tree roots and bits of rock. Going through here I became concerned about the battering my rear tyre was taking.

We pressed on and cycled up Laverock Hall road towards Cramlington. We had arranged to meet Ian at 1 pm in Seghill and were falling behind schedule. We pushed on through Cramlington and past the Giant Spoon on our way to Seghill.

Once there I checked my rear tyre and is was worryingly soft so I pumped it up before we set off towards Killingworth. Heading along the track from Killingworth to Holystone I became aware that my rear tyre was now flat! I had to stop and change the inner tube. When I removed the Slime inner tube the tell-tale green spots showed four punctures in the tube.

We set off again only for Ian to meet disaster. His front tyre punctured, he lost control on a corner and came off his bike. Ian unfortunately, is the member of the team who has developed a reputation for falling off. He repaired the puncture and we headed for the Rising Sun Country Park in search of coffee and cake.

We reached the cafe in the visitor centre just as it started to rain. By the time we emerged the shower had passed so we headed off towards the Silverlink waggonway. The last part of our route took us back through Silverlink to Shiremoor and Backworth where Ian left us to head home to Seghill. Dave, Chris and I pushed on towards Holywell via East Holywell. Approaching Holywell I acquired yet another rear tyre puncture. At this point I was close to home so I walked the bike the remaining half mile leaving Dave and Chris to ride on to Seaton Sluice.

Thirty six miles in total but for me, a day dominated by punctures. 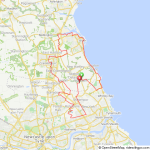