Six Backpedalers assembled outside The Delaval Arms on a warm June morning with the intention of heading north on the Coast to Castles cycle route. The weather forecast was for a fine morning with the risk of a shower in the afternoon. 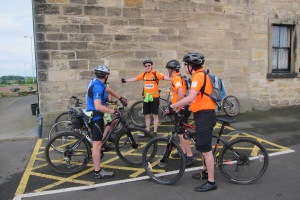 The route, by now very familiar to the Backpedalers, took the group up to Blyth, Bedlington, Cambois and on to Woodhorn.

The journey through Lynemouth was uneventful and in stark contrast to the group’s last visit. Likewise the journey from Lynemouth to Cresswell passed easily and the decision was made to end the outward journey at the Drift Cafe. 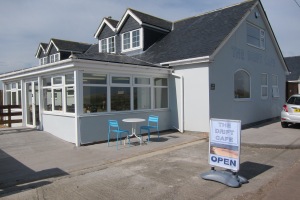 This turned out to be a good choice as no sooner had the Backpedalers been served their coffees and bacon sandwiches when a group of about twenty cyclists arrived and filled the remaining seats in the cafe. It turned out that they were a group based in Newcastle who called themselves the Old Gits Cycling Club. They were on the second day of, in their words, a bastardised version of the Coast and Castles cycle route and had called in to the Drift Cafe before heading home.